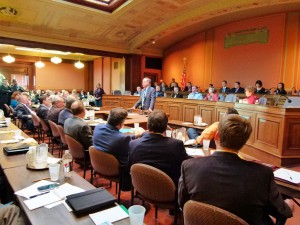 A Republican lawmaker from the Racine area will serve as the next Speaker of the state Assembly. Republican members of the Assembly on Tuesday voted unanimously to name state Representative Robin Vos (R-Rochester) as Speaker. Vos was unopposed in his bid for the position.

The Rochester Republican says one of his goals will be to work across the aisle with Democrats, even though the GOP is expected to hold at least a 10-seat majority in the chamber when lawmakers return to work in the spring. Vos says he wants “to take the best ideas from every single member,” no matter where they come from.

Vos says reforming income taxes will be among his priorities, after many families made sacrifices during the tough financial times the state has seen over the past few years. Now that revenues are growing again though, the former co-chair of the Legislature’s budget committee says he hopes to utilize some of that to give back to taxpayers.

Vos replaces outgoing Speaker Jeff Fitzgerald (R-Horicon), who gave up his Assembly seat to run for the Republican nomination in the US Senate race.