You are here: Home / Business / Walker talking around Wisconsin 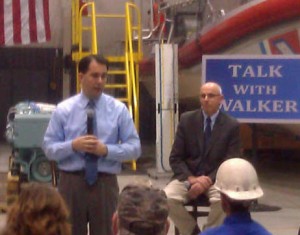 Governor Scott Walker is considering cutting taxes in the next budget, but hasn’t decided how to do that yet. He was at ACE Marine in Green Bay Tuesday for his first stop on a statewide tour to discuss budget priorities. “It’s fluid, as whether we target income taxes, do we do property tax relief, do we do a little bit of all that,” said Walker. “That’s part of the discussion we’ll have at sessions like this, at other spots around the state.”

Walker said that if he would propose an income tax cut it would specifically target the middle class since the current tax code predominantly puts the burden on them. The governor said he’d also like to help small businesses owners who would reinvest their tax savings and hire more workers. He said he’ll hold future “Talk with Walker” events around the state to make sure he hears from people with different perspectives.