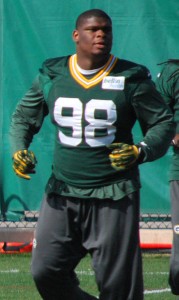 C.J. Wilson will miss Sunday’s game, but is confident in his teammates

Green Bay Packer defensive lineman C.J. Wilson is expected to miss this Sunday’s game against the Minnesota Vikings, but has full confidence in his teammates to step up in his place.

AUDIO: Wilson on not playing Sunday :12

Wilson hurt his knee on the very first play of last week’s game against the Giants, but played another 13 snaps before sitting the rest of the game.

AUDIO: Wilson on how injury happened :15

If Wilson cannot go, the Packers will miss the run stopper as they face the third best rushing team in the league, led by Adrian Peterson.  The physical Vikings team currently average 147.2 rushing yards per game.

Wilson becomes another defensive player that will miss, or looks doubtful to miss Sunday’s game.  Other names on that list include Clay Matthews, Sam Shields, and Charles Woodson.

The Packers looks to their younger defensive players this Sunday as they take on the Minnesota Vikings in an important NFC North match-up.