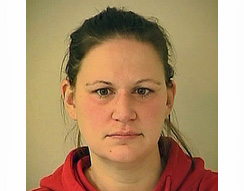 A 34 year-old woman convicted of leaving her infant daughter to die in an overheated SUV was sentenced to three years in prison in Door County Court Thursday. Melissa Martinez entered a plea of no contest to a charge of neglecting a child with the consequence of death in June. As part of the plea deal, prosecutors dropped a charge of homicide by intoxicated use of a motor vehicle.

Martinez’s 8-month-old daughter Elena was found unresponsive inside a running SUV. The baby was later pronounced dead. Prosecutors said the infant had been left in the SUV for several hours with the heat on. Court documents say the infant’s internal body temperature was nearly 108 degrees Fahrenheit after a 40 minute transport to Door County Memorial Hospital.

In addition to the prison time, Door County Judge Todd Ehlers sentenced Martinez to four years extended supervision. She also cannot have any alcohol, must stay away from bars and taverns and has to have an ignition interlock placed on her car.