You are here: Home / Legislature / 2012 in Review: Mining bill fails in Senate 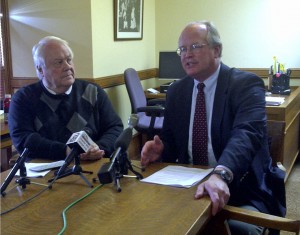 Compromise on a controversial mining bill failed in the state Senate this year. The bill was crafted in response to efforts by Gogebic Taconite, to obtain a permit for a massive iron mine in northern Wisconsin’s Penokee Range. Bill Williams, Gogebic’s president, addressed lawmakers. “Obstructionism is not healthy for economic development. We are a business that has to make an investment or a decision on a $1.5 billion project. Businesses like ours need to know the rules of the road, and we need to have an answer, whether it’s use, or whether it’s no,” he told the Joint Committee on Finance in February.

Williams told lawmakers his firm could meet state and federal environmental regulations, but on that count, state Senator Dale Schultz was not satisfied with the final bill. “How anyone could say that a piece of legislation that allows for a company to fill a navigable waterway doesn’t contain any environmental law changes, is beyond me,” the Republican said on the Senate floor in March.

“This bill is full of subjective, squishy language on public health, safety and welfare,” Schultz said, in explaining his inability to support the bill which had already passed the state Assembly.

Schultz’s opposition doomed the bill, which had been a priority for Governor Scott Walker and Republican leaders. Schultz and Democrat Bob Jauch offered a compromise, but Gogebic Taconite lobbyist Bob Seitz said that would have been unacceptable, even if it had passed. “The Schultz-Jauch bill was an attempt for political cover by opponents of the mine,” he said. “There were actually provisions that they put in that bill that were worse than the current law, and the current law works as, and is intended to be, a mining moratorium. And they made it worse.”

Gogebic pulled out of Ashland and Iron counties, where it had been exploring the possibility of the mine. It’s likely that Republicans, who will enjoy comfortable majorities in both chambers of legislature, will see a mining bill passed in the next session. GOP leaders have said a mining bill will be among their top priorities.