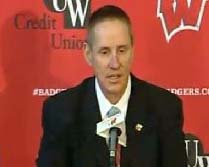 Anderson was introduced as the new head football coach at Wisconsin today.  Andersen replaces Bret Bielema, who left to take the head coaching job at Arkansas.

Alvarez wanted to know where Anderson stood on a number of fronts, including recruiting the state.

Anderson ran a spread offense at Utah State, but he said Wisconsin will stick with power football.

Anderson said he doesn’t anticipate any problems moving from the state of Utah — where he has spent much of his life — to Wisconsin.  Anderson said he looks forward to recruiting at this level.

Can Wisconsin compete for a National Championship?

Anderson said he plans to bring three or four assistants from Utah State, reach out to a couple at other schools and then mix in several current UW coaches.