According to a source, Utah State’s Gary Anderson is expected to fly into 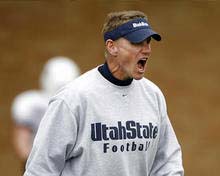 Madison today.  Because of a 2-week waiting period from the time the job was posted, Anderson can’t be officially hired as the new head football coach of the Wisconsin Badgers until Thursday.

Because of a large winter storm that is going to hit the state on Thursday, Anderson may not be introduced as the Badgers new coach until possibly Friday.

Anderson led his Aggies to a 11-2 season, including a season ending 41-15 rout of Toledo on Saturday in the Famous Idaho Potato Bowl in Boise, Idaho.

Following is my conversation this morning with Mike Lucas about the Gary Anderson decision.