You are here: Home / Badgers / Bielema introduced as the new coach at Arkansas (AUDIO) 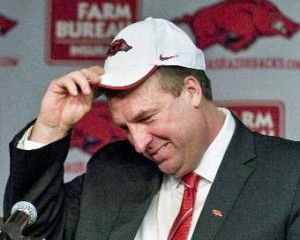 Unlike when he took over in Madison 7-years ago, Bret Bielema takes over a program that is coming off a losing season (4-8).  He’ll have to rebuild a program that competes in the best college football conference in the country (SEC).

Bielema posted a 68-24 record at Wisconsin, which means he’s hardly had to play much as an underdog.  But that’s where the Razorbacks are as he takes over.

The first order of business for Bielema is to meet with the current coaching staff at Arkansas.  He said there’ll be no coaching moves made until he meets with the current staff.  That process will start at 9am Thursday morning.

When filling out his staff, one would assume that experience in the SEC would be a must.  But Bielema indicated that wasn’t necessarily a must.

Bielema told the crowd of Razorback staff and supporters that they’re not going to go from A to Z overnight.  They want to take it one day at a time, one tackle at a time, one hit at a time.  He said the first big goal is a SEC Title.

AUDIO: Bret Bielema said the dream has to start with the SEC title :14