You are here: Home / Environment / Conservation / Board reins in park hunting expansion 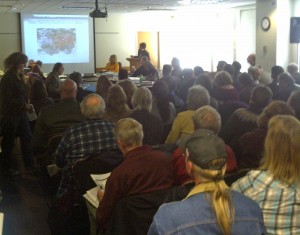 The state Natural Resources Board has approved a modified plan for expanding hunting and trapping opportunities in many Wisconsin state parks. The Wisconsin Department of Natural resources, charged with implementing legislation passed with overwhelming support, had developed recommendations calling for hunting from mid-October to late May in most, but not all, state parks. That was after the proposal ran into heated opposition in a series of statewide public hearings.

Opponents also showed up in force at the board’s regular meeting on Tuesday. More than 60 people registered to testify, and the majority either opposed the changes, or cited safety concerns at specific parks which they felt had not been adequately addressed.

State Representative Jeff Mursau authored “sporting heritage” legislation which became Act 168. “Hunting, fishing and trapping are constitutional rights for the people of Wisconsin. If the rights are going to be restrained by government, even when it is reasonable, the public should be able to identify official decision makers closing hunting access,” said Mursau, a Crivitz Republican. “Regardless of what you hear to today, peace and quiet are not constitutional rights.”

But most of those attending the board meeting in Madison had concerns beyond peace and quiet. They worried about safety in general, and in particular within the parks they live near. “Life is a short, precious gift, and I do not want to be maimed or killed by a hunter or trapper,” said Deanna Devaul of Madison, who urged the board to consider the concerns of park users who don’t hunt or trap.

“A state park is not for hunting. There is plenty of other public and private land in our state available for hunting,” said Denny Dewing, who lives in the Village of Sherwood near High Cliff State Park.

Bob Richards of Sturgeon Bay had specific safety concerns for parks in Door County. He said Potawatomi State Park is too small to safely support additional hunting, and trapping. “How can you have gun hunting, possibly archery hunting, except in the traditional and accepted seasons? And trapping? You’ve got to be kidding me.”

Carole Vande Walle, who lives near Peninsula State Park in Door County, said proposed changes had not been well publicized. “Somebody living right next to the park didn’t even know about it,” as recently as this past weekend, Vande Walle said.

Even one of the legislators who voted for the original bill urged the board to make further revisions. “I think we may have gone too far,” said state Representative Brett Hulsey. The Madison Democrat had concerns about safety on cross-country ski trails in Blue Mounds State Park.

After hours of testimony, the board approved, on a 7-0 vote, a further modification of the DNR plan. It will allow for separate Fall and Spring hunts, rather than the longer season.