You are here: Home / Packers / Matthews vs Matthews: Who wins this Sunday? 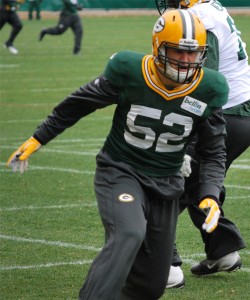 The family reunion was originally intended for Clay Matthews to play against cousin, and Titan offensive lineman, Kevin Matthews and Uncle Bruce, but Kevin will miss the game with a high-ankle sprain.

Even with Kevin Matthews out of the lineup, Clay is looking forward to Sunday.

Clay Matthews returned to the field after missing four weeks with a hamstring injury.  He  registered two sacks and six combined tackles in the crucial road win against Chicago last week.

Three generations of Matthews men have proven a strong tradition of playing in the NFL, and being exceptional players.  It dates back to the 1950’s when Clay Matthews’ grandfather played for the San Francisco 49ers.

Clay’s father then played linebacker for multiple teams, including the Cleveland Browns during the 70’s, 80’s, and 90’s.  Bruce Matthews, Clay’s uncle, played offensive lineman for the Houston Oilers and Tennessee Titans from 1983-2001.  The latter two combined for 18 Pro Bowl appearances, and over NFL 35 seasons.

Clay credits both Uncle Bruce and his father as major role models to help get him where he is today.

AUDIO: Matthews on uncle’s and father’s influence to play football :21

The winner of Sunday’s match-up will hold bragging rights within the Matthews family.  The Packers and Titans kick it off at noon on Sunday at Lambeau Field.