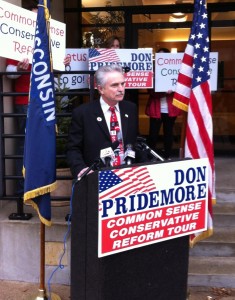 The Hartford lawmaker says he would examine private schools to “learn what they’ve done right” in improving public education policies.

While standing outside the Government Accountability Board office in Madison, Pridemore also calls school choice a “godsend. He applauds the Milwaukee voucher program’s expansion into Racine but stopped short of saying if he’d support a statewide choice program.

The 66-year-old Pridemore, who touts his past as chairman Assembly Education Reform Committee, is the first to challenge incumbent Superintendent Tony Evers.