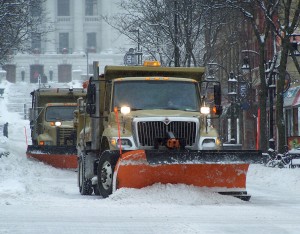 Most of southern Wisconsin is bracing for the largest snowfall in several years, expected to get underway later Wednesday night. That means state and local highway departments are deploying their equipment, to keep streets and highways clear. “When it starts, we will start with 32 trucks that we’ll send out on our major salt routes,” said Chris Kelly, who heads the Streets Department for the city of Madison. “We’ll probably team up when it starts snowing heavier throughout the day on Thursday. We’ll probably have 60 crews out, teaming up on our major streets.”

This will be the largest snowfall in Madison and surrounding areas in a couple of years, and it won’t be disposed of quickly or easily. “Our normal plows, with three inches or more, if it’s light and fluffy we can do anywhere from 7 to 10 hours,” said Kelly. This storm is expected to consist of wet, heavy snow, at least at first. And up to 12 inches could accumulate, with strong winds causing drifting conditions. “I’m looking at anywhere 12 to 16 hours” to clear the streets, said Kelly.

While there’s still some uncertainty regarding the storm’s exact track, the National Weather Service has issued a Winter Storm Warning for a large section of Wisconsin for Wednesday night and Thursday, with heavy snow and near blizzard conditions at times. The most dangerous conditions will be from southern Wisconsin, from La Crosse to Wausau. Travel will be dangerous with many roads expected to be drifted closed. Updates on winter road conditions can be found at ReadyWisconsin. School and business closures are anticipated.

“One good thing is, there are lots of places to put it, being there’s no snow on the ground,” Kelly said, adding that he hopes as many vehicles as possible will be off the streets while the plows are out. “The large piles around the cars, we’ve got to go back and push them out of the way.”