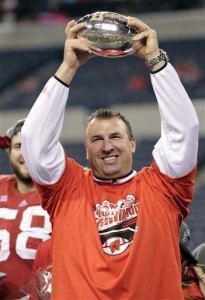 Bielema went 68-24 in his seven seasons with the Badgers, including an 8-5 mark this season.

Wisconsin has yet to make any announcement regarding the move and won’t likely do so until Arkansas first announces the hiring.  Then, the Badgers will have to decide if they want Bielema to coach the team in next month’s Rose Bowl game against the Stanford Cardinal.

Arkansas is looking to re-stabilize their football program after the controversial firing of former coach Bobby Petrino this past April.  The Razorbacks went 4-8 this season under John L. Smith.