You are here: Home / Sports / Shining Moments: Welcome to the Kohl Center 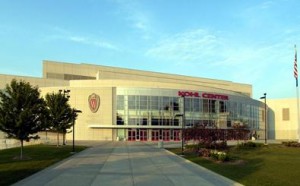 Wisconsin had played basketball at the UW Field House since December of 1930.  But on January 17, 1998 work was completed and the Badgers would step onto the floor at the Kohl Center to take on the Northwestern Wildcats.  More than 16,000 fans, thousands more than the Field House’s capacity, showed up to cheer on the Badgers. Wisconsin shot 40.9 percent during the game, to Northwestern’s 27.8.  The Badgers led 23-18 at half-time. Northwestern answered back early in the second half making the score 28-26 with just under 13 minutes remaining, but Sean Mason hit a three-pointer, which was followed by layups from Andy Kowske and Mike Kelley, leaving the score at 33-26. Then came a 15-0 run for the Badgers, and over the final 13 minutes, UW scored 28 points to Northwestern’s seven. The Badgers would take the victory, 56-33, in front of a roaring crowd; a scene that has since become common at the Kohl Center.

WRN Sports Director Bill Scott spoke with the game’s senior guard David Burkemper, who accumulated two rebounds, two assists and one steal in the Kohl Center’s first game, about the facility’s success.  About the facility’s reputation since that first game, Burkemper said, “Everybody’s looking to build the best and the newest facilities. And when you’re bringing in recruits, you know if you bring them into a dingy locker room in the Field House versus bringing them into the Kohl Center with, you know, huge lockers and TVs and the practice facility and eighteen thousand fans. I think that makes a difference when you’re recruiting kids, no matter where they’re from.”

The Kohl Center continues to be known across the country as one of the toughest venues for road teams to play in, in college basketball.