You are here: Home / News / Snow no match for drought 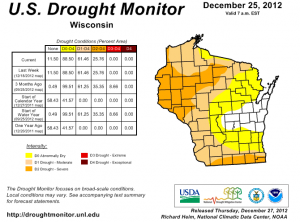 Last week’s heavy snows did nothing to ease the drought in Wisconsin. The U.S. Drought Monitor says 88 1/2 percent of the state’s soil remains abnormally dry or worse — same as a week ago.

The Madison and Beaver Dam areas had around 20 inches of snow last week,  much of the southern two-thirds of state received at least a foot, and all but the Superior area got at least some snow. Not much of it has melted, due to colder temperatures. As a result, officials say a quarter of Wisconsin’s land area remains in a severe drought – mainly in the northwest and the far south.

Another 36 percent of the state is in a moderate drought, and 27 percent remains abnormally dry. About a dozen counties in east central Wisconsin are the only ones not in some stage of drought.