You are here: Home / News / Tighter gun control will not solve shooting problem 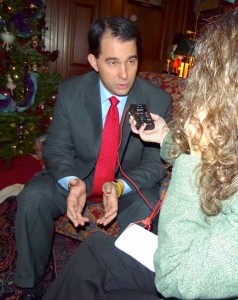 Mass shootings across the country are the result of many factors, so says Wisconsin’s governor.

In the wake of the Connecticut school shooting, a national conversation about stricter gun control is heating up. There were two recent mass shootings in Wisconsin — at a Sikh Temple in Oak Creek and at a spa in Brookfield.

However, Governor Scott Walker is not ready to place the blame on guns. “It’s really some serious questions about the mental health system and whether or not in America — not only in our state — we’re doing enough trying to identify people who have these sorts of tendencies early on, and what more can be done there. I think, more than anything, whether it’s a firearm, explosive, or anything else like that, we need to get people treatment before they get to a position where they can do something as horrific as this.”

Walker says it’s important to get to the source of the problem — to find the cause and then prevent it. He says “deranged people” have used explosives and other methods to kill massive numbers of people. Nearly 3,000 people lost their lives when two passenger jets were hijacked with box cutters and flown into the Twin Towers on 9/11/01. In the Brookfield incident, Walker points out, it stemmed from domestic violence.

As for whether our schools are safe, the governor says, “short of building a moat,” his office is working with school officials to assure the safety of children in all districts.

Some folks are suggesting teachers carry guns. Walker says it’s not that easy. “Having someone armed isn’t a magical solution,” Walker explains, “in the sense that, say the principal was armed and they were at the other end of the school, that doesn’t guarantee they’ll be at the right place at the right time.”

It’s important to get to people early on, Walker says, before they get to the breaking point. He also says we need to get rid of the stigma of mental illness. Some lawmakers want all Wisconsinites who apply to carry concealed weapons to first undergo psychological exams. Walker says it’s worth looking into. He didn’t say whether he would support a ban on assault rifles.

On a federal level, President Obama on Wednesday said control would be a central issue in his second term. He agrees that there’s also a need to discuss mental health issues and the role of violence in the American culture.