You are here: Home / News / Walker to increase use of social media 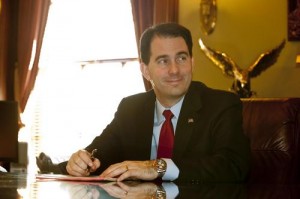 The governor talks about the impact of social media during his time in office.

“It’s cool,” says Governor Scott Walker about Twitter, Facebook, and email. Wisconsin’s first governor to really make use of social media says it’s a great way to connect with large numbers of people he can’t see on a daily basis.

Walker says it’s important to communicate face-to-face, like he does with his “Talk with Walker” sessions; still, he hopes to use social media even more. “We’re gonna find ways to do more, to be more interactive — to not just tweet, for example, but occasionally connect with video links and other things like that. It’s a great way not only to give status updates, but to talk about policy and to connect with other interesting stories.”

Walker mostly promotes events and various radio, TV, and newspaper interviews. However, there are some more personal messages. Recently after our first winter storm of the season that left 15 – 20 inches of snow in the Madison area he tweeted, “Shoveled my driveway & sidewalk in Wauwatosa tonight.” Back in August the governor let his many followers know his wife was fine after emergency surgery: “Tonette had a successful appendectomy early this am,” he continued, “Thx for prayers!”

While it’s easy for the governor to get his message out, it’s also easy for his critics to instantly voice their opinions using the very same social media. “It’s a lot more to handle, but, I try to kind of, communicate and I don’t get bogged down or consumed with what others are saying.”

The governor says it’s his duty to provide the public with updated information “related to the operation of state government.”

On June 7th, Lieutenant Governor Rebecca Kleefisch thanked social media, in part, for her win in the recall election.