You are here: Home / Badgers / Who’s next in Madison for the Badgers (AUDIO)

In his first season as co-defensive coordinator last season, Ash’s defensive unit ranked 13th in the country in scoring defense (19.0) points a game and 15th in the nation in total defense.  Ten of the Badgers’ 14 opponents failed to score more than 17 points.

Before Alvarez takes a shot at Ash or any other candidate not named Paul Chryst, he must talk with Chryst and try to bring him home 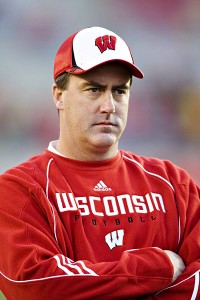 for a final time.

Chryst grew up in Madison, played for the Badgers and coached the teams tight ends in 2002.  He then returned again in 2005 as the team’s co-offensive coordinator before moving into the permanent coordinator role in 2006.  There he stayed until taking the Pittsburgh head coaching job following the 2011 season.

Chryst led some record-setting Badger offenses in 2010 and 2011 and had been a candidate for a number of jobs before landing in Pittsburgh.

Chryst does have a buyout in his contract in Pittsburgh which is something Wisconsin will have to decide whether or not they want to deal with.  Fans may have to dig a little deeper into their wallets with donations if they want to see Chryst in a head coaching role on the Badger sidelines.

Northern Illinois will play in the Orange Bowl, but Dave Doeren won’t be there after he was hired December 1 by North Carolina State.

Doeren spent five years at Wisconsin and served as Defensive Coordinator and linebackers coach.  Would Doeren reconsider if the ink is still wet and Barry Alvarez comes calling in Madison?

As a player, Bevell was a four-year starter for Barry Alvarez at quarterback.  He helped guide Wisconsin to a 10-1-1 record as a sophomore in 1993, claimed a share of the Big Ten championship for the first time since 1962 and won the Rose Bowl to boot.

He left Madison as the school’s all-time leading passer with 19 team records and a pair of Big Ten marks.

Bevell worked with the Green Bay Packers as an assistant for six years, moved on to Minnesota where he became an offensive coordinator and now holds the same position in Seattle with the Seahawks.  He has experience and has expressed an interest previously about returning to Madison.

The list starts there, coaches with Wisconsin ties.  A list of coaches that are more than ready to take over their own program.  Will Barry Alvarez go with a list of players that he’s had some familiarity with, or does he look outside for Bret Bielema’s replacement?