You are here: Home / News / Winter storm will be the real deal 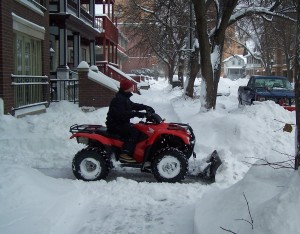 A winter storm headed for Wisconsin could bring significant snowfall to portions of the state which have not seen much snow so far this season. “North and west of Madison, you can feel pretty sure that you’re going to get a nice dose of snow, and that it will be mainly snow,” said WKOW meteorologist Brian Olson in Madison. “Some of the models actually give us a pretty good hit of rain on Wednesday night, and then change it over to snow.”

Olson said six to twelve inches of snow are possible. The storm is projected to move from the southwest to the northeast, with heaviest snowfall amounts along a line from Monroe, through Madison, to Fond du Lac. The National Weather Service has already posted a winter storm watch. In addition to the snow, the storm is expected to be accompanied by strong, gusty winds of up to 35 miles and hour, along with plummeting temperatures. And much of the snow is likely to be of the wet, heavy variety. “Perfect snowball making kind of snow, and backbreaking for people shoveling,” said Olson.

While many parts of northern Wisconsin have already experienced heavy snowfalls, this storm will be the first big snowfall for the Madison area. It comes just in time for the official start of winter, which begins on Friday.