You are here: Home / Brewers / Anothers Brewers jersey? Get em while they’re hot 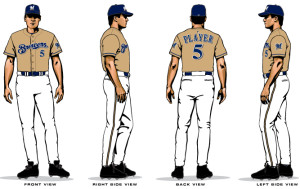 alternate jersey to be worn on occasion beginning this season.  The jersey tops will be worn for the first time by players and coaches on Sunday at “Brewers On Deck” in Milwaukee.

The new uniform top will be available exclusively at Brewers On Deck and the Brewers Team Store by Majestic at Miller Park beginning Sunday.

Fans will be able to photograph players and coaches in the new uniform on Sunday at “Brewers On Deck.”