The Wisconsin Badgers hockey team ran its unbeaten streak to 9-straight games, knocking off 11th-ranked Minnesota State 4-3 in overtime in 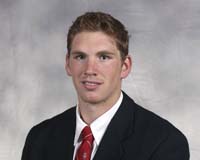 The Badgers have now won 5-straight and puts them in a tie for seventh place in the Western Collegiate Hockey Associate (WCHA) with Minnesota Duluth at 15 points.  Both Wisconsin and UMD are just 1-point behind the Mavericks.

The game was scoreless until Wisconsin’s Joe Faust lit the lamp at the 18:02 mark of the 1st period.  Minnesota State evened the score at the 19:16 mark with a Matt Leitner goal, and the first period ended at 1-1.

Wisconsin’s Ryan Little scored the only goal of the second period, at the 19:02 mark, giving the Badgers a 2-1 lead.

Minnesota State would force over time with another Matt Leitner goal at the 18:09 mark of the third period.

With time winding down in the 5-minute overtime session, Badger defenseman John Ramage of the Badgers tallied the game winner on a nice feed from Nic Kerdiles at the 4:28 mark in overtime.

The Badgers will shoot for their second straight weekend road sweep when they face the Mavericks again tonight.

Wisconsin’s Peterson made 30 saves for the Badgers in the win, while Minnesota State’s Williams tallied up 24 saves and Phil Cook made two saves.

The Badgers look to leapfrog Minnesota State in the WCHA standings as they aim for a win in the second game of this series tomorrow night.