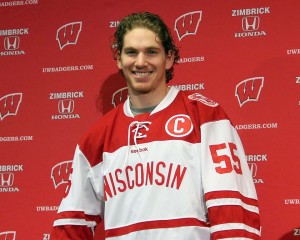 that will be worn Feb. 17 when the team faces off against Minnesota in the OfficeMax Hockey City Classic at Soldier Field in Chicago.

Throwing back to one of the earliest eras of the UW Hockey program, the alternate uniforms are reproductions of those worn by Wisconsin’s 1931-32 team, which can also be been featured in the background on this season’s team poster.

The Hockey City Classic marks the third time in eight seasons that the Wisconsin hockey program will play one of its games outdoors.  The Badgers defeated Ohio State,
4-2, in the Frozen Tundra Hockey Classic at Lambeau Field in 2006 and beat Michigan, 32, at the Culver’s Camp Randall Hockey Classic in 2010.

This event features two matchups, with Notre Dame taking on Miami (Ohio) at 12pm (CT), then Minnesota and Wisconsin set to follow at 3:30pm (CT).