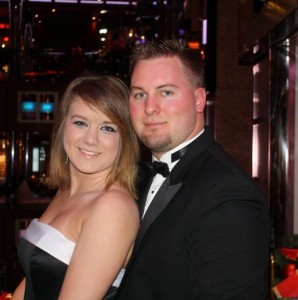 UPDATE: The Dane County Medical Examiner’s Office is confirming the identity of the deceased couple discovered after a fully-engulfed car fire was extinguished by firefighters.

Brandon Slattery, 24, and Amy N. Damon, 21, were both from Edgerton, Wisconsin.

Preliminary results from autopsies suggest neither was a victim of criminal activity. The Chief Medical Examiner has ruled the manner of death for both: Accidental.

This case remains under investigation by the Village of McFarland Police, the State Fire Marshall’s Office and the Dane County Medical Examiner’s Office.

Firefighters made the gruesome discovery of two bodies after extinguishing a burning car just south of Madison on New Year’s Day.

A person close to the victims’ families say engaged couple Brandon Slattery and Amy Damon are the deceased. Police are awaiting autopsy results for confirmation of identity.

Some residents in McFarland, Dane County, awoke to the tragedy early Tuesday morning. A car was fully engulfed in flames in the street, and when firefighters extinguished the blaze, the tragic discovery was made.

Neighbors say they woke up at 6:00 am to the sight of “flashing lights” and “lots of smoke.” One local resident says flames were shooting 10 to 15 feet into the air from the windows of the car. Once firefighters extinguished the blaze, they made the horrible discovery. Police say it doesn’t appear that foul play is an issue.

Police say it doesn’t appear foul play is an issue, but the investigation continues. The victims are reportedly in their 20s. More information is expected later today.