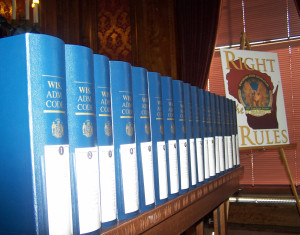 Streamlining Wisconsin’s business rules poses a challenge. At 18 volumes, 1,768 chapters, and more than 11,000 pages, the state’s administrative code presents a daunting task to read, much less rewrite. “This is not exciting reading,” said state Representative Dan LeMahieu who, as co-chairman of the Joint Committee on Administrative Rules will lead an effort to do that. “This is a lot of detail. It’s a lot of minutiae that businesses have to deal with every day. That’s the code that they have to make sure they’re not violating.”

Assembly Republicans are taking the lead on an effort to review and streamline those rules, which govern a wide variety of activities by business and government. They say the hope is to make the rules easier to comply with for business – with the goal of boosting the state’s economy. “It’s our attempt to go through all these chapters, and make them work for the people of Wisconsin, and protect the people of Wisconsin the way they should be protected,” said LeMahieu.

The process will be to divide the code chapters among the 38 standing Assembly committees for review. “This is a period of time in the legislative session where the committees aren’t quite as busy,” said LeMahieu. “They haven’t had a lot of bills sent to them yet, and it gives them an opportunity to spend some time looking at some of these chapters, and start the process.” It’s a process LeMahieu believes could easily take more than one two year session of the legislature. A website has been created to solicit public feedback. 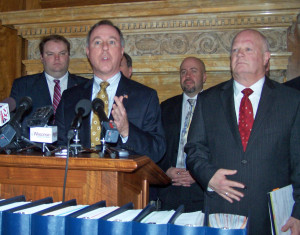 The review has been a priority for Governor Scott Walker (whose office released a preliminary report last week), and Assembly Speaker Robin Vos. “People all around the state ran for office talking about regulatory reform. And as far as we have been able to discover, this is the first time that there has been a thorough review of all of the rules, done by the legislature,” said Vos. “Hopefully, we can get Democrats to cooperate with us. I’m very optimistic with the good start of the session, that they will engage fully. It’s not a partisan issue to try to get rid of unnecessary regulations that hamper job creation.”

One issue, which attracted a lot of attention when the preliminary report was released, are the state’s rules regulating unemployment insurance. Wisconsin allows 18 exceptions, under which people who voluntarily quit a job – as opposed to being laid off – can collect unemployment. And, there’s a proposal to increase the number of required weekly job applications by unemployed workers, from two to four. “I certainly think that in the world we’re living in, asking people to go out every day to look for a job, or even most days of the, is not too high a burden, considering the fact that they are collecting unemployment, until they are able to get another job,” said Vos.