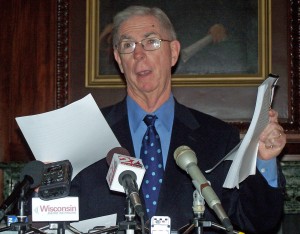 There are competing bills on mining being offered in the Wisconsin legislature this session. State Senator Tim Cullen unveiled his measure on Tuesday, the day before the one and only scheduled public hearing on legislation being offered by Republicans. At a Capitol press conference, Cullen identified four common areas where he doesn’t think there is room for dispute. He said all lawmakers want to increase jobs in the state, that the large amount of surface water in the Penokee Hills presents a challenge to environmentally responsible mining, that the proposed iron ore mine will create millions of tons of waste that could impact water if not responsibly disposed of, and that Wisconsin needs to work in concert with the federal government in any permitting process. “I hope those are four things there could be common agreement on, before we deal with legislation,” Cullen said.

Cullen said his mining bill is the product of listening to all stakeholders on the contentious issue. “Last fall, the Senate Select Committee on Mining held about 20 hours of public testimony on four different days, all across the spectrum,” he said. “So this bill reflects what I learned, not what I wish.” Cullen said his bill will offer a more realistic timeline for permitting of an iron ore mine in northern Wisconsin, and will leave the state’s existing environmental regulations in place. He said the GOP authored bill, scheduled for a public hearing on Wednesday, does neither.

At least one GOP member is nost on board with that measure. State Senator Dale Schultz said it rolls back environmental protections. “I think it’s clear that the bill does make it easier for us to degrade our water resources,” said Schultz. “And it’s being done when no one has really asked us, or articulated a need why that has to be done.”

Schultz said the Republican bill is close to – but actually worse than – the bill he helped defeat last session. And he says the manner in which that bill was developed was at odd with the process Cullen used to put together his bill. “It was orphaned,” Schultz said. “No one claimed ownership of it, until someone over in the other house decided to claim they were Spartacus. And then they all stood up with great theatrics, and sad that. Where was that discussion held?”

While Cullen’s bill is a relatively brief 25 pages, the GOP version runs to 206 pages, of which Cullen says roughly 100 pages are devoted to rolling back environmental protections. “The fact is, this is arguably Wisconsin’s most pristine watershed,” said Cullen. “That’s what we’re talking about impacting.”

The public hearing on the GOP mining bill begins at 9:00 a.m. at the Capitol, and is expected to last all day.