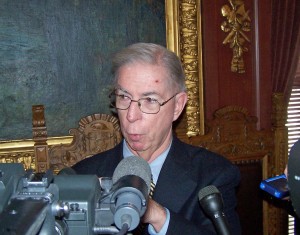 There will be more than one mining bill offered in the legislature this session. Janesville Democrat, state Senator Tim Cullen, held extensive hearings on mining while Democrats briefly held the Senate majority following recall elections. And he’ll offer his own mining legislation as a counter to the bill introduced by Republicans. “The difference is, my bill does not lower environmental standards in Wisconsin,” Cullen said. “Their bill spends well over 100 pages doing just that.”

Specifically, Cullen charges that the GOP bill will allow waste from a massive taconite mine in Iron and Ashland Counties to be dumped into waterways, waste which would have the potential to contaminate the headwaters of the Bad River, which flows into Lake Superior. “Their bill says “there’s so much water, we have to let them dump the waste in the water.” They will allow that to happen, as a price that they’re willing to pay to try to have a mine get permitted,” said Cullen. “The Corps of Engineers will not tolerate that, the (Bad River Chippewa) tribe will not tolerate that.” Cullen predicted that any attempt to approve a mine under terms of the Republican bill would result in “unlimited litigation.”

Cullen heard from a variety of stakeholders while he chaired the state Senate Select Committee on Mining last year. “They told us how it really works. And because there’s so much water, it will be difficult to get a permit in this site, but not impossible. My bill tries to get there, to have that be possible, without dumping the waste in the water.” 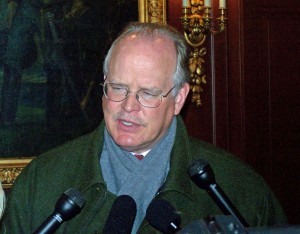 Republican Senator Dale Schultz, whose lack of support doomed a GOP mining bill from passing last session, said he’s willing to look at the new bill. “I’m going to do that, but I want to make it clear that I’m still concerned about our environment, and particularly damaging Wisconsin’s most abundant, most important resource, which is our clean water,” said Schultz. “I believe we don’t have to sacrifice our environmental process and standards in order to create jobs. I also think it’s important that we be honest with people about what changes we are willing to make, and the likelihood of jobs being created.”

Schultz also said that he also intends to sign on as a cosponsor of Cullen’s bill. Cullen said introduction of the bill could come as early as Friday.