You are here: Home / Packers / Jones has remarkable season for Packers (AUDIO) 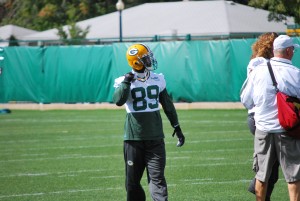 Rodgers to go to on every pass play, the numbers that James Jones has put up this season has been nothing short of outstanding.

The Packers are a team that’s loaded with talent and it wasn’t too long ago that Jones  was under fire for a number of big drops during the Packers 2010 Super Bowl run.  You had to wonder if Jones would ever be able to turn things around and get QB Aaron Rodgers to treat him as a go-to player.

But that’s exactly what’s happened.  Always a talented receiver with good size, the drops went away and the consistency necessary to be a difference maker started to appear.

Jones hauled in 64 passes for 784 yards during the 2013 regular season, ranking 2nd in both statistics.  His 14 touchdown catches not only leads the team, but the entire NFL as well.

Jones has started to win the 50-50 battles and out-jump defensive backs to make plays.  Now when the Packers have the ball in the Red Zone, there’s a good chance it may be going to Jones.

64 catches is like 80+ on other teams.  Because Rodgers spreads the ball around, it prevents his most reliable receivers, like Jones, from catching as many balls as they might deserve.  Teammate Jordy Nelson said when you come to Green Bay, you have to check your ego at the door.  If you work hard and get open, you’ll get the football, just not as much as some receivers as other teams.

Rodgers completed passes to 10-different receivers in the playoff win over the Vikings and that’s a normal occurance for the Packers.