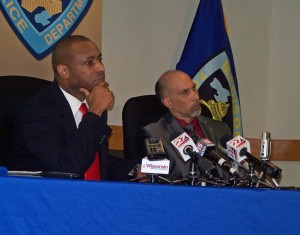 An internal investigation has cleared a Madison police officer who fatally shot an unarmed man for return to duty. Officer Stephen Heimsness shot and killed 30 year-old Paul Heenan in the early morning of November 9th on a residential street in Madison. The department’s investigation determined that Heimsness’ use of deadly force against Heenen “was objectively reasonable,” and in compliance with department and state standards.

The investigation concluded that Heenen, who had entered a neighbor’s home while drunk, ignored Heimsness’ orders to get down, and the officer felt Heenan was going for his gun when Heenan lunged towards him after wrestling with homeowner Kevin O’Malley. MPD Professional Standards Lieutenant Dan Olivas outlined facts determined in his investigation. “The officer believed Mr. Heenan was trying to grab his firearm, and the officer believed that his life was in imminent danger. The officer fired three shots. State Crime Lab investigators have determined the distance between the muzzle of Officer Heimsness’ weapon and the subject’s clothing was between 24 and 42 inches. We also know that from the time Officer Heimsness observed the physical altercation occurring between Mr. O’Malley and Mr. Heenan to when the shots were fired, only 15 seconds elapsed. It was discovered after the fact that Mr. Heenan’s blood alcohol level was at least .20.”

The aftermath of the shooting has seen considerable public condemnation of MPD and Heimsness. “I know in this community that there are some people who, given the nature of this incident, are never going to believe that the right thing happened,” said Chief of Police Noble Wray. “That happens with officer involved shootings, and I understand that. But we’re still going to do everything we can to listen to the community, to improve what we do, and to do everything we can to build trust.” 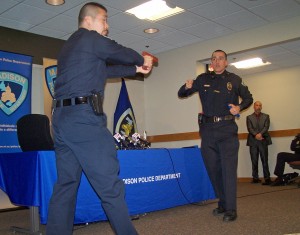 Wray and Olivas briefed the media during a more than hour-long press conference which reviewed the incident and the internal review. It included video of a reenactment of the shooting, and a demonstration by training officers, Sergeant Jason Freedman and Officer Kimba Tieu, who explained how officers react in deadly force situations.

An administrative suspension against Officer Heimsness has been lifted, although Wray said where and when he’ll return to duty has yet to be determined. “The intent is to get Officer Steve Heimsness back in patrol, back in his assignment,” said Wray. The department offers – but does not mandate – services to officers who’ve been involved in deadly force incidents. “There’s a clear history with police officers in officer involved shootings with post traumatic stress, but . . . we do not mandate.”