You are here: Home / Sports / Shining Moments: Battle with the Golden Gophers 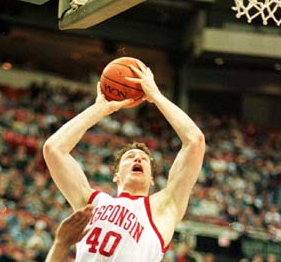 The 1996-97 Badgers had their sights set on a trip to the NCAA Tournament, but would have to get past the Minnesota Golden Gophers to get there.  Minnesota was ranked #2 at the time.  The Gophers came out hot. By the end of the first half the Badgers were down by seven. Senior center Paul Grant rallied the team at the half. The second half would be a battle to the end, with the Badgers coming out on top by a single point. The final score was 66-65. The win gave the Badgers a birth in the NCAA Tournament, only their second appearance since 1947.

WRN Sports Director Bill Scott spoke with Grant about the game. “I remember coming down in the locker room and just looking everybody in the eye, you know, and saying we’re better than this. We knew what was on the line. We knew it was a huge game,” said Grant.