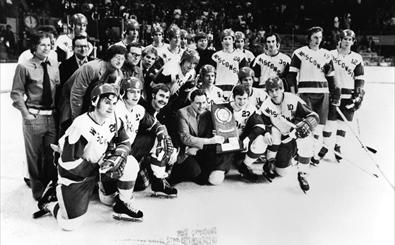 The 1973 NCAA semifinals saw Wisconsin traveling to Boston Garden to take on Cornell. The teams had only met once, three years earlier.  Cornell had won that game, and went on to win the 1970 NCAA title. This game would start off in Cornell’s favor with the Big Red scoring a goal 40 seconds into the game and another eight minutes later to take a 2-0 lead at the break. In the second period Cornell continued its run by scoring 31 seconds in and another four minutes later. Cornell maintained a 4-0 lead until 12 minutes elapsed in the second period. Wisconsin’s Norm Cherry scored at that point, followed by Dennis Olmstead a minute and a half before break to begin the comeback and cut the lead to 4-2. In the third period, Cornell scored again, 41 seconds in to take a 5-2 lead but the Badgers came back with goals from Gary Winchester at the eight-minute mark and Jim Johnston at the 16-minute mark to make it 5-4. Dean Talafous scored the tying goal with five seconds remaining. In overtime with 33 seconds left, Talafous again broke through for Wisconsin, scoring the game winner to put the final score at 6-5.

Bill Scott spoke with Badger right wing Jim Johnston about the game that led to the Badgers’ first NCAA championship.  “Being the first, it’s special. Especially considering that only four years prior we weren’t in the league,” said Johnston.

Johnston says the team owes a lot to its fans. He recalls, “We had in the stadium about 3,000 Badger fans. And they didn’t quit. They were there. They were screaming and yelling. We were down four, but they were there cheering us on.”

Johnston scored a goal in the NCAA title game against Denver the next day.  He accumulated 103 points over his career for Wisconsin. The Badgers win over Denver to take the NCAA crown is believed by many to have made Badger hockey a household name. The Badgers have won 6 NCAA hockey championships since then.