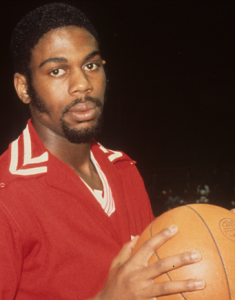 March 3, 1979, the Badgers faced 4th ranked Michigan State at the UW Field House.  Wisconsin had lost at the last three meetings with the Spartans. This time the Badgers were looking for a conference title. The score remained close the entire game, with neither team gaining a comfortable lead.  At halftime, Wisconsin had a 44-43 lead. With 3 seconds remaining superstar Magic Johnson hit two free-throws for Michigan State to tie the game at 81. That’s when the Badgers inbounded the ball and Wes Matthews hit a shot from 50 feet away at the buzzer to win, 83-81.  Matthews would leave the court with 19 points, five assists and four rebounds. The Spartans would go on to win the 1979 National Championship, making the Badger victory that much sweeter. The season-ending win gave Wisconsin its fourth consecutive Big Ten victory, the first time the Badgers had won four straight conference games since 1967.

Claude Gregory played forward for Wisconsin and led the team with 25 points and 16 rebounds, a block and a steal. WRN Sports Director Bill Scott spoke with Gregory about the game. “I figured at that point, you know it was the last game of the season, or close to it, and I think we finally found a groove. We were in a good groove and what-not. And it reflected in that game at that time,” said Gregory.

Gregory went on to be Wisconsin’s career leader in point, with 1,475, and rebounds, 904.  His points record would stand until 1990. Today, he is in 4th place. He went on to play for Washington in the NBA. The game featured several other future NBA players, including Wisconsin’s Wes Matthews, Larry Petty and Joe Chrnelich, and eventual basketball legend Earvin “Magic” Johnson of MSU.