You are here: Home / News / Walker not campaigning yet 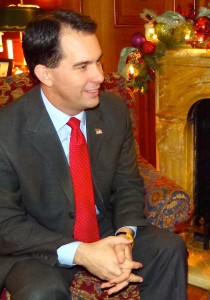 What’s next for Walker … a run for president?

Governor Scott Walker has found himself in the national spotlight over the past year — for better or worse — as a result of his controversial collective bargaining bill and the subsequent recall election.

The governor chuckles upon the questioning of his prospects for another campaign. “Having run twice in the last two years I said I’m just happy filling out my term. We’ll see in the future what our intentions are and if the good Lord’s got another term ahead of us.”

There’s some speculation about a presidential run in 2016, while some are focusing on another term as governor in 2014.

Walker is qualified for the nation’s highest office, according to his own standards as he explained to a group of Republicans at the Ronald Reagan Presidential Library in California earlier this year. He said executive experience is important before campaigning for the country’s chief executive gig. “I believe your best executives are proven executives … in the private sector or other levels of government. So, a mayor county executive, I think, is a great governor; I think a president, quite frankly, should either be a vice president or a governor, not a senator.”

Walker says Americans understand that “you’re better off with someone who’s been proven and tested as a chief executive.”

Walker certainly has name recognition, but for now, the governor downplays a campaign of any kind for the time being, considering he just had two campaigns in as many years. “For now I’m focused on finishing out the next two years strong and meeting our goals.”

The governor says he’s focused on the budget and paving the way for more job creation in Wisconsin.