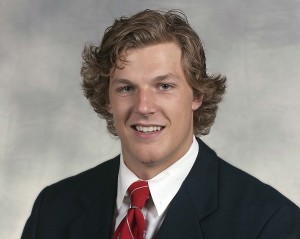 The Eau Claire, Wisconsin native scored twice on goalmouth scrambles in the first period to put the Americans out in front.  Teammate John Gaudreau added a pair of goals for the United States as well.

After a 2-2 record in the preliminary round, the Americans routed the Czech Republic 7-0 in the quarterfinals on Wednesday, then beat Canada in today’s semifinals.

Canada didn’t lose a game in the preliminary round and had a bye into the semifinals, losing their first and only game of the tournament today.

The United States will face defending champion Sweden in the Championship game.