You are here: Home / News / A late winter wallop 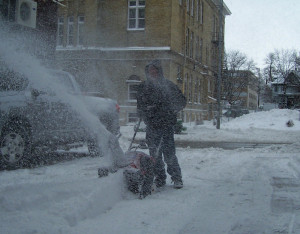 Parts of Wisconsin woke up to some unexpectedly heavy snowfall Wednesday morning. Valders in Manitowoc County reported 10 inches on the ground, with snow continuing to fall. Damon Ryan at WOMT in Manitowoc said one caller reported that his commute took twice as long as usual. “He was coming in on Highway 10, and he indicated that it was like driving through a plowed field,” said Ryan. “It was pretty rough.” Schools were closed in Manitowoc and transit busses serving Manitowoc and Two Rivers were not running. “I talked to a sheriff’s department dispatcher, and she asked me to tell people to please stay off the roads,” Ryan said.

In Sheboygan County, the Wisconsin Department of Transportation was urging no travel, due to blowing and drifting snow. The storm is being blamed for at least one traffic fatality, the driver of a car that slid into an oncoming milk truck late Tuesday morning, as snow fell west of Delavan on Highway 11. The road was closed for more than three hours. Wednesday morning, a semi-truck crash closed a ramp between two Interstates at Milwaukee’s Mitchell freeway interchange, just prior to the start of rush hour. Numerous slide-offs were reported around Dane County, most of those attributed to motorists driving too fast for conditions.