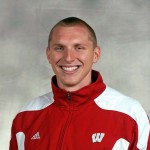 The Badgers have 6-games left in the Big Ten.  Had they won last night’s game, their Big Ten title hopes were realistic.  Now they’re 2-games back and their prospects aren’t nearly as good.

Wisconsin (17-8, 8-4 Big Ten) dropped into a three-way tie for third place.  They trail conference co-leaders Indiana and Michigan State by 2-games.  Michigan and Ohio State are both tied with the Badgers.

The Badgers still had a chance to win it in regulation.  They had the ball with :17 left and a 49-47 lead.  But on an inbound play, Mike Bruesewitz took several steps on the baseline, which is a violation.  The ball went to the Gophers.

Following the turnover, Minnesota’s Joe Coleman drove to the basket, drew a foul and then made both free throws to tie.  The Badgers had a shot but Traevon Jackson missed a contested jumper and the game went to overtime.  Jackson committed three turnovers and hit just 3 of 14 from the field, one of his worst games of the season.

Up next for the Badgers, the Ohio State Buckeyes at the Kohl Center on Sunday.