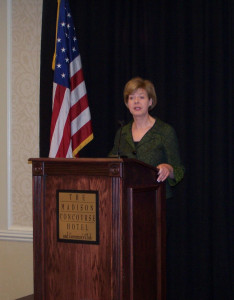 Speaking to crowd from the Superior-area, U.S. Senator Tammy Baldwin renews a call for bipartisan solutions. “Not one party, not Democrats, not Republicans have all the answers. One party can’t move our country forward, our state forward,” she told the crowd Wednesday at Superior Days, a lobbying event in Madison.

The Democratic lawmaker said she understands the challenges facing the region of Northern Wisconsin which is plagued by high unemployment and low wages. Baldwin emphasized the need to develop a high-tech manufacturing economy in Wisconsin and a strong infrastructure while investing in education and research.

As a former House member who is only in her second month in the Senate, Baldwin said she is “humbled” to represent the people of Wisconsin in her new role.