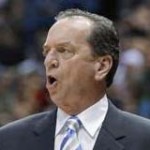 knocked off the Milwaukee Bucks 102-90 at the BMO Harris Bradley Center on Monday night.  Beal made 10 of his 17 field goal tries, including 4 of 5 from behind the 3-point line.

The win for the Wizards is their 4th straight.  It also marks the 4th straight defeat for the Milwaukee Bucks, who have dropped 6 of their last 7.

The Bucks remain in the 8th and final playoff spot in the Eastern Conference.  They’re just in front of Philadelphia in the playoff chase.  Those two teams will square off in Milwaukee on Wednesday night.