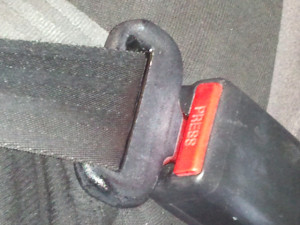 Is it time to increase the fee for not wearing a seatbelt?

At just ten bucks, one lawmaker says the fine is too low and doesn’t act as a deterrent for would-be offenders. “If we increase the fine, it might make people pay more attention.”

Assembly Democrat Penny Bernard Schaber of Appleton says she would look into the idea, after a newspaper reported the state’s annual “Click It Or Ticket” campaign is not working. “From the article in the paper … it does look like people just are not paying attention to the fact that seat-belts are important and that you should wear them every time you get in the car.”

Bernard Schaber says it’s a major impact to the communities when people are killed in car crashes, especially young folks.

Randy Romanski with the state DOT says the national Click it or Ticket program does work, because it’s changing the behavior of drivers. The compliance rate for Wisconsin seat-belt use is at an all-time of over 79 percent. “…which is a trend in the right direction, however Wisconsin does lag behind its neighboring states in seat-belt utilization and the national average, which means we need to do more.”

There was an increase in the number of people using seatbelts after primary enforcement went into effect, but Romanski says the agency has identified increasing seat-belt use as a high priority — up to 85 percent compliance by the end of 2013. The 10-dollar ticket has not gone up ever since the state passed a seat-belt requirement 26 years ago.

Romanski adds, wearing a seatbelt is the single most effective way to prevent from being ejected or thrown around violently in a car crash. More than 50 percent of fatalities on Wisconsin roads last year were unbelted.