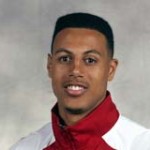 hard to believe he was an 81% shooter from the charity stripe last season.

The Badgers have been able to get by with Evans in the lineup late in games without having his free throw difficulties kill them, but it’s been a little shaky at times.

Evans has banked free throws (made & missed), and he’s failed to hit the rim 4 times.

Wisconsin coach Bo Ryan suggested that Evans try shooting jump shots from the line, so Evans has been working on it in practice.

AUDIO: Evans says free throw woes have been on his mind all season :14

Wisconsin needs Evans on the floor because he plays very good defense and rebounds as well as anyone on the team.  But he also factors into the offense and is good at drawing fouls and getting to the free throw line.  Now the Badgers need him to make them.

We’ll find out Tuesday night when Wisconsin plays host to the Nebraska Cornhuskers in Big Ten action at the Kohl Center.