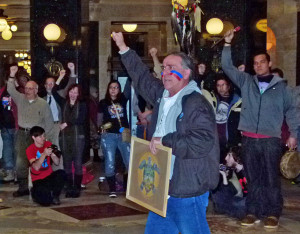 As lawmakers debate the mining bill, native Americans converge in Madison to voice their opposition.

Normally occupied by the Solidarity Singers, the Capitol Rotunda was packed over the lunch hour with Indians from up north as well as many onlookers. Marvin Defoe is a council member from the Red Cliff Band of Lake Superior Chippewa. He says they traveled from up north to tell lawmakers not to contaminate their water.

The mining bill would streamline the permitting process for a proposed iron ore mine in northern Wisconsin. Defoe says the group was at the statehouse also representing the Bad River Indian tribe in support of clean water in their neck-of-the-woods by the Penokee Hills.

After chanting, dancing, and drumming (video) under the Capitol dome, the group planned to visit the senate chamber where Wisconsin senators were debating the mining issue. If the Senate approves the legislation, it would head to the Assembly for a vote and then to the governor’s desk for final approval.

Meanwhile, a new report says an Indian tribe that fears pollution from a proposed mine in northern Wisconsin has pollution problems of its own.