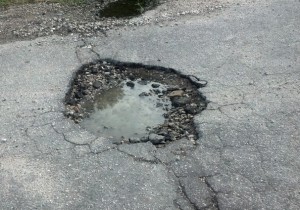 Temperatures climb during the day causing snow and ice to melt and creep into road cracks and when temps dive at night, the water freezes and expands in the cracks — perfect pothole-making conditions. As vehicles roll over the hole, it progressively gets bigger.

Mike Sproul, state winter maintenance engineer with the Department of Transportation, says it’s a good reason not to tailgate. “One thing motorists can do is keep back from the car in front of you, that way you’ll see it coming.” Then you’ll have time to react, and perhaps avoid the hole.

Driving through a large pothole has the potential for expensive vehicle damage, including wheel alignment issues.

Sproul says they’ll have crews fixing the holes with a temporary material, and they’ll do a more permanent repair in the summer. They do weekly surveillance, but it’s just a matter of getting a team out there to fix them. “Some places are harder to fix than others. Imagine the guy trying to throw a bucket of asphalt in a hole on the beltline … you can’t just do that during rush hour.”

It’s a good time to remind motorists of the state’s Move Over law. “If there’s a maintenance vehicle or law enforcement vehicle on the road and they’ve got their lights on, you’re required to move over into the other lane if there’s a lane or slow down as you pass them.”