You are here: Home / Sports / Jennings denies wanting out of Milwaukee 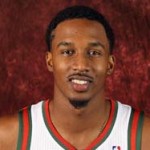 Bucks and said he’s not worried about what the next week will bring leading up to the NBA Trade Deadline.

Jennings will be a restricted free agent at the end of the season and several reports circulated Wednesday about the possibility of Jennings being dealt before the February 21st deadline.

AUDIO: Jennings said the rumors didn’t come from him :14

Bucks coach Jim Boylan said he had just heard the chatter but didn’t believe a word of it.