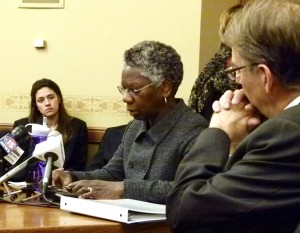 Lawmakers want answers following allegations of millions of dollars in fraudulent charges by a foster care agency in Dane County.

Officials with the Department of Children and Families talk to members of the state Senate Health Committee about accusations that owners of a Middleton foster care agency overcharged the government more than $6 million, and used that money for personal gain — for excessive salaries, luxury cars, boats, and trips around the country.

Committee Chair Leah Vukmir (R-Wauwatosa) asks how many more cases like this are out there where people are potentially stealing money from taxpayers.

A nearly year long audit flagged Community Care Resources’ questionable expenses after counties expressed concern about the agency in November 2011. Department of Children and Family Secretary Eloise Anderson says she’s not sure what could be done to remedy such issues, and will wait until the CCR case is completed and report back to lawmakers. “Every system has weakness it in, but I think they are more weaknesses than they are fraud. But where there’s fraud, we’ll find it.”

A panel member asked Anderson whether there is a criminal investigation under way by the state attorney general. She couldn’t confirm or deny, but said DCF officials have been in communication with the Department of Justice.

The state has revoked CCR’s license, and is seeking repayment of the overcharges.

Vukmir just wants to get to the bottom of it, and prevent more fraud before it happens. “I’m open to any suggestions and ideas to make this process more transparent and obviously to prevent situations like this from happening.”

After the committee hearing, panel member Democratic Senator Jon Erpenbach from Middleton — the same location as the accused foster care agency — said he was pleased with the information discussed at the meeting. “It sounds like the process works,” though he says, “It sounds like they could use a few more bodies to go through a few more audits in that agency.”

CCR owner Dan Simon has strongly disputes the allegations against him. He was advised by his lawyer not to attend the hearing.