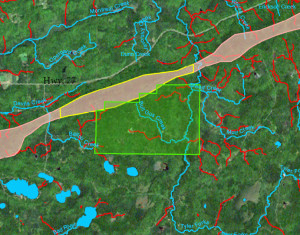 Controversial legislation which would overhaul Wisconsin’s mining regulations remains on the fast track at the Capitol, even as opponents continue to raise concerns on the possible environmental consequences that a massive open-pit iron ore mine would have on northern Wisconsin.

Governor Scott Walker has urged prompt passage of the legislation. With the Joint Committee on Finance set to vote Monday on the bill to rewrite the state’s mining laws, concerns remain about impact any permitted mine could have on surface waters. “What the bill does is makes a presumption that destroying wetlands, destroying streams, is a necessary aspect of running an iron mine, and that as long as you promise to go build one somewhere else, it’s okay to wipe streams off the map,” said state Representative Fred Clark.

“AB-1 would set a precedent for allowing the destruction of navigable waters – streams, lakes, ponds and rivers – that has really never been allowed to occur in Wisconsin before,” said Clark, a Sauk City Democrat. “That’s a precedent that could easily be carried over into other activities. It’s the foot in the door that I think people who homes around lakes, for example, are really concerned about.”

Clark said the provision is in conflict with Wisconsin’s Public Trust Doctrine, and is one of numerous parts of the mining legislation which will invite litigation if a permit for a mine is applied for. “If we’re really serious about allowing a mine to operate responsibly, and actually letting a project like that develop, this bill is not going to help us get there,” he said.

Clark and Eau Claire Democrat, Representative Dana Wachs, have released a map which they said shows streams and lakes near the Penokee Range which could be permitted for alteration or destruction based on standards for navigable water impacts contained in the legislation. The proposed iron ore mine would be in the Penokees, in Iron and Ashland Counties. The map was prepared by Environmental specialists at the Great Lakes Indian Fish & Wildlife Commission. GLIFWC’s member tribes include the Bad River Band of Lake Superior Chippewa. Bad River Tribal Chairman Mike Wiggins has been a vocal critic of the mine.