You are here: Home / News / More snow on the way today 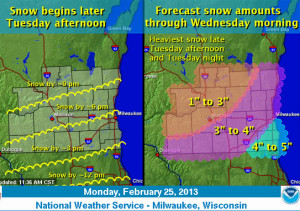 The same winter snow system that’s breaking snowfall records to the south and west of Wisconsin will be bringing some snow to the Badger state on Tuesday. A Winter Storm Watch has been posted for 10 counties in the southeast corner of the state. “In Milwaukee and Madison we’re looking snow starting in the afternoon, a little bit earlier in the far south, and probably not until mid to late afternoon towards central Wisconsin,” said Morgan Brooks is with the National Weather Service in Sullivan.

Milwaukee, Racine, and Kenosha are part of the storm watch, along with areas from Sheboygan to the north and Janesville to the west. Madison is not part of this watch, but forecasters say much of southern and central Wisconsin will get light snow. It’s the same slow-moving system that will dump heavy snow on the Great Plains, breaking records in places like Topeka and Kansas City. And – sorry shovelers – it’s going to be wet and heavy, and accompanied by winds of up to 30 miles an hour. Look for snowfall amounts from 4 to 7 inches.