You are here: Home / Brewers / Parra signs with Reds 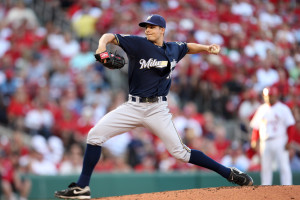 pitcher Manny Parra to a 1-year deal.  Parra became a free agent when the Brewers didn’t offer him a contract for 2013.

Parra  was a part of the Brewers bullpen that blew 39 saves and lost 33 games last season.

Parra’s 1-year deal is reportedly worth $1-million with incentives that could earn up to $400,000 more.