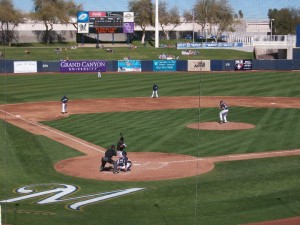 The top pitchers in the mix for those three openings are Chris Narveson, who is coming off of rotator cuff surgery; Mike Fiers, who made 22 starts for the Brewers a year ago; Wily Peralta, who is one of the top prospects in the Brewers organization and Mark Rogers, who is out of minor league options.

Full squad workouts begin on Saturday, and it won’t be long after, that the Brewers will part with 15 players for the World Baseball Classic.  Among the 12 are catchers Jonathan Lucroy and Martin Maldonado, the only two catchers on the Brewers 40-man roster.

The exhibition season begins for the Brewers on February 23rd.