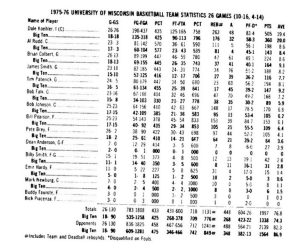 In a fantastic display of determination, the Badger men’s basketball team made school history on January 5, 1976 after falling 22 points behind Ohio State, but coming back to win the game. It started out close, Wisconsin and OSU battled back and forth for the lead in the first quarter. The Badgers had a 20-18 lead with 12:56 remaining in the first half, but Ohio State took off and gained a 22-point lead over the next nine minutes. At half-time Wisconsin trailed OSU by 18 points.

It was halfway through the second period before Wisconsin was back in 10 point range of the Buckeyes. With a lot of help from Dale Koehler, who scored eight points in the last six minutes, the game was forced into overtime by a 72-point tie.  OSU had a 79-74 lead halfway through the period. Then, guard Tim Paterick, who came off the bench, hit three-straight jumpers from 12-15 feet away, the last of which came with 36 seconds left to take an 80-79 lead. Another player off the bench for Wisconsin, Brian Colbert, finished things off by hitting two free throws. OSU scored the last bucket (82-81) with eight seconds left, but it wasn’t enough.

WRN Sports Director Bill Scott spoke to Paterick, who tied for third on the team with 10 points, about the game and making the comeback.  Paterick said, “I used that over time as I coached my two boys playing basketball…I always used to bring up the fact that we were down at half-time but that’s only half-time and you gotta play a complete game.”

The Badgers finished the season 10-16 overall and 4-14 in the Big Ten. They would beat Ohio State once more that same season in a 91-79 victory.