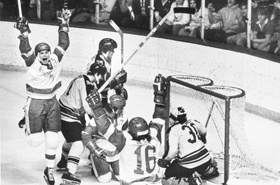 It was game 33 of the 1976-77 season. The Badgers were on a hot streak, having won the last 11 games. They were going up against the Minnesota-Duluth Bulldogs at the Dane County Coliseum in Madison. Three minutes into the game, Mark Johnson scored a goal for Wisconsin, followed by another Badger goal from Mark Capouch five minutes later. But Duluth quickly responded with three goals of their own and ended the first period with the Badgers down 3-2.

The second period would begin with eight minutes of silence before Minnesota-Duluth would get another goal. It took Wisconsin six minutes more to answer.  When they did it was a quick rally with goals from Les Grauer and Dave Lundeen.

In the third period Wisconsin took the lead with a Craig Norwich goal three minutes in and center Jim Scheid put the game away six minutes later with another goal, giving the Badgers a 6-4 victory.

WRN Sports Director Bill Scott spoke with Scheid, who says the night is easy to remember because it was his first goal.  About the Badger’s first title Scheid said, “We went out that night in February and played a very good Duluth team and we were very happy to come away with a win…For a program that’s trying to achieve that, it’s just very special. The first one is always the toughest one to win, I think.”

In addition to clinching its first WCHA regular season title, Wisconsin also won a 12th consecutive game, a record which still stands today. The team went on to defeat Michigan for the NCAA Frozen Four title. Wisconsin became the first school to win the WCHA, Big Ten and NCAA titles all in the same season.