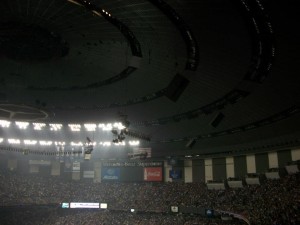 night, especially for Roger Goodell and the NFL, but it also put a halt to Baltimore’s momentum after they jumped out to a 28-6 lead and allowed the 49ers to get back into the game.  The Ravens won Super Bowl XLVII 34-31, but that outage made the game worth watching again.

After Jacoby Jones returned a kickoff 108-yards for a touchdown and putting the Ravens up by 22-points, most fans were likely thinking that things were looking pretty bleak for the 49ers.  Television viewers were near certain that the best part of the remainder of the game would be the commercials.

Then came the power outage, which wiped out the lights and electricity to half of the stadium.  35-minutes later and the 49ers were about to begin a 17-point third quarter.

A touchdown for Baltimore and the game would have been put on ice, but the Ravens
59-yard drive resulted in a 38-yard field goal by rookie Justin Tucker and the games outcome would be left in the hands of Colin Kaepernick.

One had to like Kaepernick’s chances.  Afterall, he would finish with 286 passing yards against the Ravens in the second half.

The 49ers marched down the field and it looked as if they would score too quickly and leave too much time on the clock for Joe Flacco and the Ravens.  But the Ravens defense tightened and the officials put their whistle and penalty flags deep into their pockets, not to be seen or heard from again.

Three straight incompletions and the 49ers drive stalled and that was the game.

Kaepernick was making just his 10th NFL start and he almost brought his team from behind again.  But Kaepernick will have to have his shining moment at a different time.  This time belonged to Joe Flacco (124.2 rating), who tossed three touchdown passes and was named the games MVP.

The power outage almost brought the 49ers back.  Who knows if the game would have turned without it.  It didn’t appear to be very likely.